The Golf Shank: Cure Your Case Of The Shanks 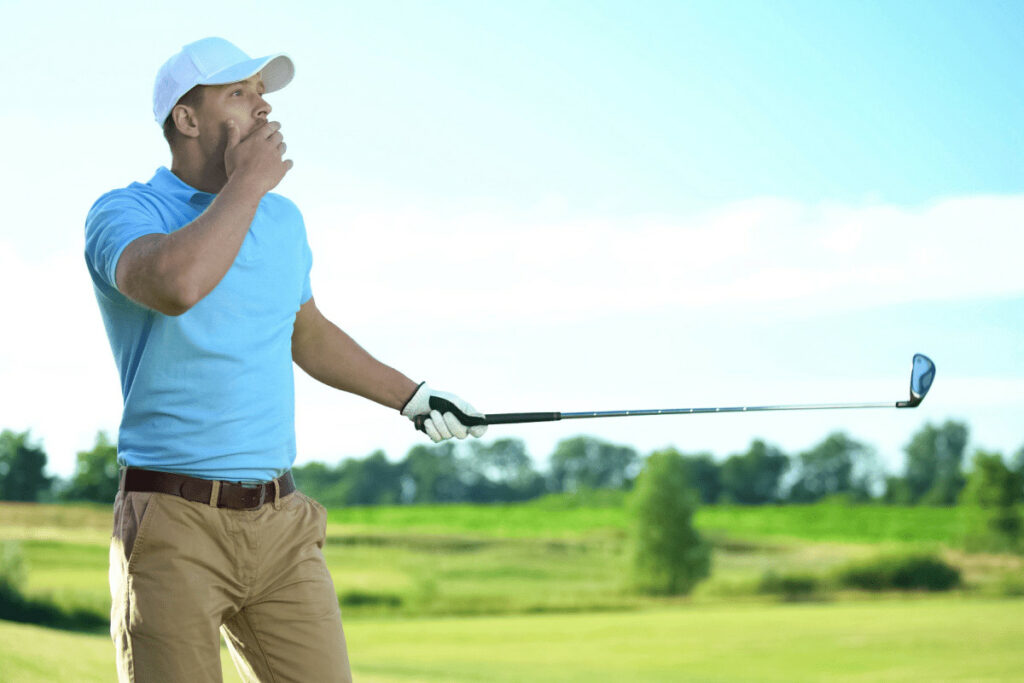 The word shank is a pretty bad word in the game of golf. In fact, even writing it bothers me a bit. This is just something that you don’t even want to talk about on the golf course or ever have to address. However, it’s a reality.

There are thousands of golfers that are struggling with a shank right now, and it’s essential to learn the key fundamentals that are necessary to fix this shank. Unfortunately, not all golfers shank the ball for the same reason.

Let’s dive into some of the most common causes of a shank in golf and what can be done to fix it.

What Is A Golf Shank?

A golf shank is a shot that is hit off the club’s hosel. The typical shank feels funny; some even describe it as a near miss or if the club completely turns in your hands. The shanked shot is a dangerous one.

Most of the time, the ball flight is directly to the right, and it always seems to go just far enough to get you into some bad trouble on the golf course.

Shanks are almost more dangerous than topped shots because they go considerably further.

When you have to deal with a golf ball that is not on the right track, but it still has plenty of speed to it, you generally end up in a bad situation.

A golf shank is truly what nightmares are made of on the golf course.

What Causes A Shank in Golf?

As I mentioned, most shanks are not caused by the same exact reason. You can shank the ball because of a variety of issues in your swing, so it’s important to learn what is causing it and how you can then make changes to fix it.

The main perpetrators tend to be associated with setup and club path.

Let’s dissect the top causes of a shank in golf.

What is the point of taking the club back if you are already set up for disaster? So many amateur golfers underestimate the importance of the setup and stance. Building a solid foundation for your golf swing is something that professionals work on the most.

The grip is another factor that must be as close to neutral as possible if you want to avoid the shanked golf shot. Many players get a bit too aggressive with their grip, making it too strong or too weak.

It takes a lot of work to maintain the proper grip pressure and ensure your hands are in the appropriate position. It gets even more difficult if you move away from the neutral position.

Before you start reinventing your golf swing because of a single shank, it makes sense to check your setup and grip and ensure you are ready to hit a good golf shot.

The club path is one of the most common reasons for hitting a shank. When your club path is incorrect, you will end up with an open clubface at impact. With a shank, the clubface is so open that the ball ends up making contact with the hosel of the golf club.

The result is a club head flying in at an improper angle with a face that is no longer square to the path. Sounds like a recipe for disaster, and it is.

It’s a bit harder to determine if your club path is causing the issue of your shank, so taking a video of your swing and watching it in slow motion can help you analyze what you are looking at.

Sliding Into The Ball

Golfers with lots of power and control in their golf shots tend to have a good pivot. Those that notice higher dispersion rates are usually sliding into the golf ball. Sliding can be a problem both on the backswing and on the downswing.

As you make your transition from the top of the backswing to the downswing, the left hip (for right-handed players) needs to make a pretty clean and clear turn. If your turn looks more like a hip bump, you are sliding into the ball and could easily sneak a shank or two into your round.

Of course, there are golfers that slide into the golf ball and do not shank it. However, they are likely very good at timing, and they often have tremendous athletic ability to help square the clubface up.

Just because you can sync up and have good timing doesn’t make it a good move to slide into the ball.

Golfers swing the club on a plane. If the plane is upright, players can have shots that are high or fade a bit to the right. If the path is shallow, you often see more of a draw ball flight or something a little lower.

However, if the path gets shallow and inside, that’s when you can see a shank. For golfers that shank the ball because of this, there is not much extension in the swing. Instead, the club comes inside almost directly after the club moves away from the ball post impact.

When you get into this shallow and inside position, it’s very hard to recover the angle of the clubface and get it back to square. Most players leave the face wide open, and the golf ball is struck on the hosel.

In addition, with this shallow and inside swing, the golf club often completes a partial rotation behind the player. The result, of course, is even less time for the golfer to square up the club head.

How To Fix The Shanks

Regardless of why you are shanking the ball, if you have the shanks, they have to go. This is not a swing flaw that you can live with or be comfortable with; it’s nearly impossible to even play a few holes knowing that you just shanked one. So, let’s look at how to fix the shanks and what you need to know to start working on this process.

Hitting a shank is a major mistake, and it isn’t very pleasant when it happens. This type of miss can significantly increase tension in your hands and arms. Unfortunately, this tension only increases your chance of hitting another shank.

When you hit a bad shot on the golf course, make sure you are not too tense as you continue to play. Tension in the hands and arms only leads to more problems.

Some golfers think that the tension is focused only in the hands or in grip pressure, but this is not the case. The forearm is where a good amount of the tension will creep up. Take some deep breaths, allow your body to flow naturally, and you will notice fewer shanks.

Get Some Extension In The Swing

If the reason you are shanking the ball is the fact that you take the club inside and shallow right off the bat, sometimes the thought of extension can make all the difference. In fact, a great takeaway will fix not just a shank but plenty of other swing flaws.

Start by ensuring that when you push the club away from the ball, you keep it low to the ground. When the takeaway is low, it forces you to keep your arms extended.

Golfers that pick the club straight up tend to have issues with the plane and with extension. These two problems can leave you returning the clubface to the ball at all different angles. Although it will only happen sometimes, there is a good chance you will end up shanking a few shots if you are not extending on the takeaway.

Golf alignment sticks are such a great way to work on fixing a shank.

What I love about alignment sticks is they give us an idea of our lines. There are so many lines in golf! Think about how your feet, hips, shoulders, and clubface all have to be lined up. In addition, you have lines for your swing plane.

I use this one as a guide to check every once in a while and ensure my backswing is starting the way it should. There are dozens of positions for alignment sticks when you practice. The key is you can highlight any glaring issues in your game that could be causing the shank.

For golfers that are really struggling and having a hard time with a repeated shank, there is a trick you can try to help get the clubface squared up.

Set up to hit the golf ball and put your right foot back about a foot. It should feel well behind your front foot; it will be a bit of an awkward stance. However, this particular trick sometimes helps players clear up their issues with the shank.

You may also find that the right foot back drill also helps improve posture and overall control of your movements in the swing.

This isn’t a solution that we encourage all that much. You will sometimes need to get off the golf course to fix the shanks. Let’s face it, golf is a very mental sport, and if your mental game has you terrified of shanking, you will likely continue to do so until you give it a break.

Don’t leave the game for long; shake things off, and even come back a few hours later. A mental reset is sometimes all you need to get back into the swing of things.

At this point, you should feel as though you can identify and cure a shank. Golf shanks are truly the worst miss out there, but the good news is they are very fixable. You will probably have an easier time fixing your shank than fixing a slice.

I highly recommend narrowing down the cause of your shank before you work on making too many swing changes. There is no need to mess with a great swing if your setup is what is causing the shank. Find the cause, then attend to that and you’ll be back to hitting it pure in no time!