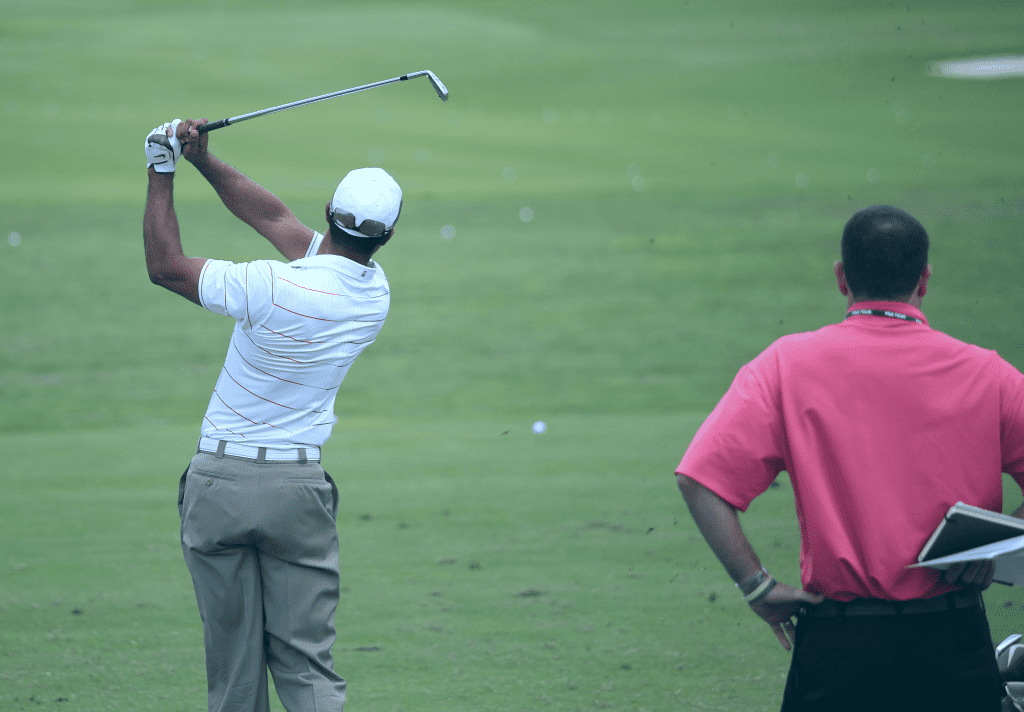 The Srixon ZX5 and ZX7 are two of the most popular sets in the Srixon line. Recently I decided to test both the ZX7 and the ZX5 to see how they performed. I looked at distance, forgiveness, feel, and the overall look of the club as well.

Srixon makes nice looking golf irons; they go for a clean and thinner look that I find appealing. In this piece I’ll give some more insight into what I thought about the Srixon ZX5 VS the ZX7 and which one should be used in your golf game. Let’s dive in below! Check Price on Golf Galaxy
We earn a commission if you make a purchase, at no additional cost to you.

The Srixon ZX5 is a club designed with the idea of combining high ball speed and a forged feel. With the ZX5, you will get a ton of forgiveness from a club that looks like a more workable player’s iron. Standing at address, I had no idea that I would get as much forgiveness as I did when hitting the ZX5.

This ZX5 iron is a cavity-back golf club with a thin topline. The offset is there, but it’s not obnoxious. The longer blade length and slightly wider sole help to make this a bit more mid-handicap friendly.

Of all the Srixon ZX family clubs, the ZX5 has one of the widest soles and the most offset. Still, with the impressive design, it does not stand out too much at the address. The PW loft here is 44; this is about standard for a game improvement iron.

The Srixon ZX7 is a player iron that helps golfers get better control without sacrificing ball speed. With the compact blade shape and narrow topline, the better player will feel like they have control over what these irons do.

With the ZX7, the feel is also quite appealing. The single-piece forgiving improves the feel and the look and makes the iron a bit more workable. If you are particular about the look of a club and want a more tour-preferred shape, this is a great choice.

The thin topline is important, but the combination of the top line and the wider blade length is what gives the iron its playability and forgiveness.

With a 46-degree pitching wedge, the ZX7 has more traditional lofts. This is good for a player that doesn’t need a huge distance boost but is more concerned with ball flight and control.

The ZX5 is the longer iron of the two. However, I found that this had more to do with the loft of the club than the technology in the clubface. Distance from both irons was fair, and compared to other golf clubs in the TaylorMade, Callaway, and Titleist lines, the ZX5 and ZX7 do not fall short.

However, I will tell you if pure distance is what you are looking for, the ZX5 and the ZX7 would probably not be my top choice.

There are other bulkier golf irons out there that allow for a bit higher ball speed. These two golf iron sets from Srixon work on combining feel and precision with the ball speed, making it considerably easier to get plenty of distance off the face.

When it comes to forgiveness, the Srixon ZX5 is more forgiving than the ZX7. Srixon offers an entire series in this ZX line, and it starts at the ZX4 (a forgiving and hollow cavity back iron) and proceeds up to the Z Forged, a players style blade.

The ZX5 is one step up from the hollow back construction with extreme forgiveness. It is a cavity back iron that allows players to miss the center of the face just a bit without a sacrifice in performance.

The ZX7 is more forgiving than the Z Forged, and you can see this simply in the shape of the design.

A ZX7 iron is more workable than a ZX5, and whenever we see that in a product, we know that it will tie back into the total forgiveness in the club.

I liked the fact that I could hit a high draw or a low fade with the ZX7 in my hands. However, it did cost me a few more strikes when the swing was not quite as solid.

The ZX7 and ZX5 both have a really good feel off the face. Where the ZX5 pulled ahead in the forgiveness and distance category, I found that the ZX7 has a slightly better feel. It’s the single-piece forging that leads to this impressive feel and is something hard for cavity back golf irons to produce.

One thing I can tell you is that if you like a little feedback from the club head, the ZX7 is a great choice. You will feel it when you hit a bad shot. I’m a player that enjoys that because it helps me to make the necessary changes to my swing.

However, if you are going through a swing adjustment of some kind or only get to play golf occasionally, the ZX7 can be a tough choice in the short term.

The ZX7 is a clear winner when it comes to superior feel, but the ZX5 is no slouch either. Both feel great, but the ZX7 will be the preference of better ball strikers.

I think one of the major reasons that Srixon has done so well this year is because of the clean look of their golf irons. Most of the time, clean-looking golf irons are not all that forgiving, and frankly can lead to less distance for an average ball striker.

Luckily with the ZX5 and the ZX7, that was not the case. They both have a clean top-down look; the ZX7 is cleaner than the ZX5. In addition, the ZX5 has a slightly longer blade length, so it naturally looks a little bulkier.

In the long irons, the ZX5 has a larger sole than the ZX7, which is to be expected.

The ZX5 is offset quite a bit, and it’s noticeable from the top down, but it doesn’t look bad; if you’re moving from a game improvement set this will look pretty normal.

One of the best options here is to look at doing a mixed or combo set of irons. If you want that clean look with a bit less offset in the short irons, you can go with the ZX7 and then transition to the ZX5 for more forgiveness in the long irons.

This is a combination that makes a lot of sense, caters to those with a particular eye, and still gives a good bit of performance.

I love when two sets of golf irons have the same price. How great is it to take the price out of it and decide on a golf club specifically based on the performance? With the ZX5 and ZX7 irons dropping from their original prices over the course of 2023, now is a good time to buy.

The Srixon ZX5 and the Srixon ZX7 are both good sets of irons, but they will appeal to different players. Here’s my take on this:

If you are a consistent ball striker, mid to low handicapper, and want to control your golf shots on the course, the Srixon ZX7 is the way to go. This is a player’s iron, but it still has enough distance and forgiveness to help those of us who are human!

The Srixon ZX5 is a game-improvement type cavity back iron for the mid-handicapper. The great thing about the ZX5 is that there is still enough workability, feel and clean looks that you won’t feel like you are using something clunky.

Final Thoughts on ZX5 VS ZX7

I’ve enjoyed experimenting with the Srixon equipment this year. Srixon’s irons tend to fly under the radar, but they are starting to gain a larger presence on the PGA tour and for amateur golfers alike.

I find that their golf clubs have a great feel and are some of the best-looking options on the market for the money. If your handicap is on its way down and you are ready for shorter irons that are highly responsive, think about the mixed set of ZX5 and ZX7 irons. Just be smart about the lofts when you do this.