Strike Spray Review: Getting More Out of Your Swing 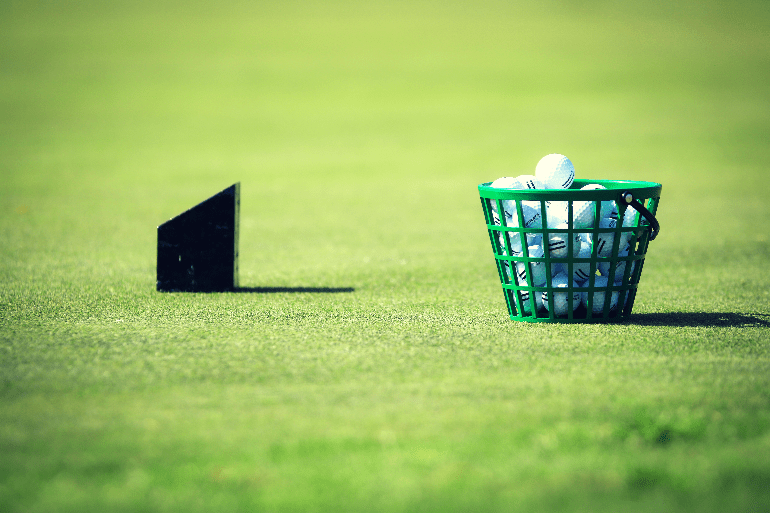 When I’m on the range, I need a way to see where I’m making contact and track my progress. Without Strike Spray, I could continue blindly believing everything is okay. When I use Strike Spray, it offers valuable feedback I can incorporate into my practice sessions to improve as a golfer.

Buying a dozen buckets of balls and powering through them on the range is useless. That is, useless unless you’re practicing with some kind of strategy. Besides wasting a ton of money, it produces ideal conditions for making bad habits worse or picking up new ones. Even if you’re at a private country club where range balls are free, the principle remains true. Don’t bother practicing unless you’re doing so with a purpose.

Alignment sticks are useful, but don’t fix everything. Setting your phone up to film yourself is great for going back after and reviewing your swing. The film method works to a degree, but is very risky to put in front of yourself, directly in line with where you’re hitting. To get the most accurate feedback, you need to identify where on the clubface you’re making contact. Cue the need for a Strike Spray review.

You can’t play a power fade if you always hit the ball off the toe of your club. On the flip side, adding a baby draw to your arsenal is impossible if you can’t find the sweet spot a bit just off the center. If you’re only trying to find some sanity and work on hitting the ball straight, it’s important to know where your misses are coming from. Strike Spray is an effective way to get immediate feedback. This product also eliminates the need for having a coach or a friend with you. With Strike Spray, you can figure out what’s going wrong and how you can fix it all on your own.

So What is Strike Spray?

This is a Strike Spray review, so we might as well get to what exactly the product is. Like stickers most used by club fitters, Strike Spray comes in a can and is sprayed onto the face of a club. With a thin coating that doesn’t affect ball performance, it leaves a marking on the clubface where you make contact. Essentially, you won’t need to guess where you made contact. Strike Spray takes any uncertainty out of the equation. Whether you like what it tells you or not, well that’s something you need to deal with on your own.

Drive for Show (and easy looks at the green)

You cannot be a successful golfer without moderate success off the tee. You can’t be looking in the woods 20 yards from the fairway and still expect to hit a green in regulation. It’s not realistic. What is more realistic, however, is limiting the severity of your mistakes. This means having your bad misses be only 5 yards off the fairway. The first step in refining driving accuracy is becoming a more consistent ball striker. To accomplish this, you need to know what you’re doing wrong if you want to fix it. Enter Strike Spray.

Strike Spray works best with drivers because it has the least amount of resistance. If you’re hitting on turf or in regular grass, more than the golf ball will connect with the club. When you’re using a driver and tee, most of the time the only mark will come from the ball. Every once in a while, the tee will show on the clubface, but this isn’t much of a concern. With a driver, you’ll have to reapply Strike Spray less frequently than with any other club.

When people read a Strike Spray review, or any other similar review, their mind jumps to drivers. If you’re practicing with only your driver, that’s a problem. For me, I practice on a range that’s too short for drivers, so this doesn’t really apply to me. However, when I get the chance to practice on a longer range, all I want to do I hit driver and I need to reel it back in. Regardless of where you’re hitting balls or how much room you have to work with, get a full rotation going and use all your clubs.

Most golfers have a consistent shot shape. Whether they like their shot shape or not is a different question. Regardless of which iron you’re hitting, it’s likely you’ll see the same shot shape. The severity of a hook or slice will be greater with a 4-iron compared to a 9-iron. But, that’s largely due to how far the shot is travelling and how hard you swing.

Besides a driver, Strike Spray is most effective in providing feedback with irons. When things are going poorly for me, which is more often than I’d like to admit, the range and a 7-iron is all I need to figure out what I’m doing wrong. Strike Spray lets me know whether it’s a stance issue or a swing problem. After that, it’s on me to right the ship and get back on track.

Everyone has seen pictures of Tiger Woods’ Scotty Cameron Newport 2 GSS putter with a wear mark etched at the exact center. The only way a putter can get this way is by hitting thousands of putts in the exact same spot. Since Tiger is exceptional and you’re reading a Strike Spray review, we can guess you’re not quite as exceptional. Not to pile on, but you don’t have the time to hit thousands of putts, let alone perfectly either.

Most amateur golfers have limited time to play and practice. Just like on the range, we have to make our time on the practice green count. On top of that, strike consistency is an area where most golfers struggle. To help with making center and square contact, Strike Spray can be applied to the face of a putter. This provides the same type of feedback you’d get with any other club and can help you create a consistent, square putting stroke. Center hits from the putter means more dropped putts, and a lower score.

Chipping is one of those areas on the golf course where it’s pretty clear what went wrong (or right) based on how the ball comes off your club. No matter how the shot looks, a big part of believing is seeing. Don’t get me wrong, you don’t need Hank Haney to tell you that you’re hitting chips thin because you’re making contact at the very bottom of the clubface.

Where Strike Spray helps is determining how close to the center you’re hitting chips. In many cases, you could be pulling or pushing short shots because of swing path. In other cases, it could be because you’re making contact at the toe or heel. Regardless of what’s going wrong, Strike Spray will eliminate some possibilities. It will also push you in the right direction of fixing your short game problems.

Not many courses have bunkers where you can work on sand shots. If you happen to have access to a half decent one, congratulations. For everyone else, don’t let this stop you. Half the fun of twilight golf is being on a quiet course where you can take extra shots and work on different things. Find an empty hole, drop down a few balls in a bunker and break out the Strike Spray.

Naturally, practicing in the sand is messier than on a turf range mat. No matter how much sand gets on your club face, the most prominent marking will be where the ball hit the club. It may not offer as much feedback as with drivers or irons, but knowing where you’re hitting ball out of a trap goes a long way in getting up and down more frequently (or getting it out of the trap altogether).

What’s Everyone Else Saying?

The internet is a great place. Not only can I use my own feedback in a Strike Spray review, I can also take what everyone else has to say. One of the most important things I was able to take from other reviews is that Strike Spray is perfect for identifying trends.

No matter how good you are, there will be outlier shots where you hit it off the extreme toe or heel. Yeah, those shots show on your clubface, but we’re looking for what we do frequently, not every once in a while. Instead of reapplying Strike Spray after each shot, hit about 15, flip the club up and see where most of your shots are. This will tell you your tendencies better than anything else.

Too many golfers blindly hit balls hoping that their issues will go away overnight. It’s nice that some people believe they’ll magically hit the ball long and straight, but we all know it’s not going to happen. In order to maximize the limited amount of time we get to practice, we need a product that gives each range session a purpose.

Strike Spray replaces a swing coach and puts you in the driver seat. Rather than rely on a second person or your own guesses, this product lets you be your own teacher—and with a bit of knowledge to work with. Get to know your swing and striking trends; you’ll get better at golf.