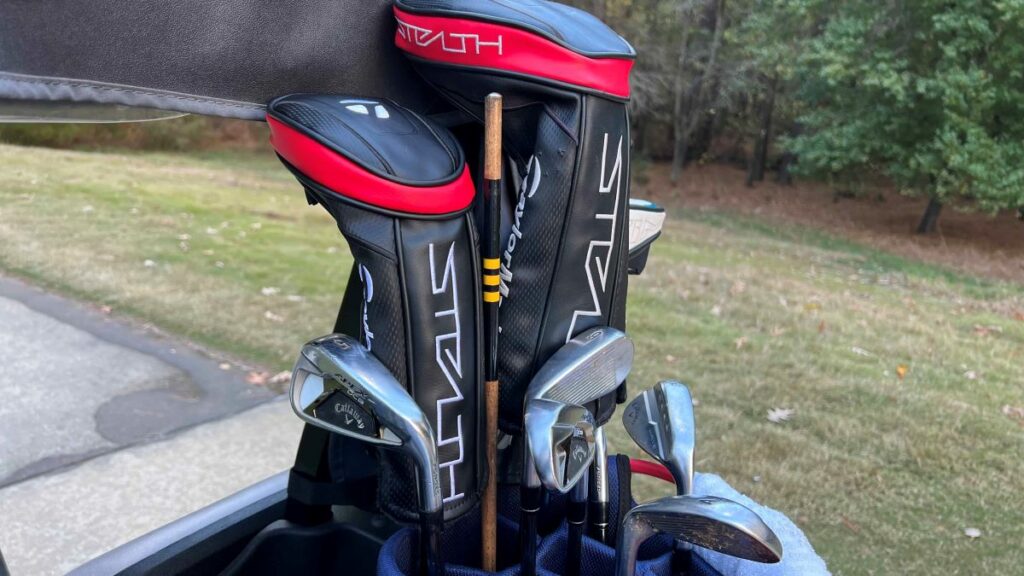 TaylorMade dominate when it comes to producing high caliber fairway woods and drivers. They always have, and right now it looks like they always will.

With the right fairway wood in hand, the club can be a weapon for you on the golf course. Released in 2022, the Stealth fairway wood is one of the more anticipated clubs on the market, and for very good reason.

In this piece, we’ll check out some of its features first to understand the tech behind this club. Then, we’ll tell you what we found when putting this fairway wood through its paces.

Let’s get into our TaylorMade Stealth fairway wood review below.

The Stealth performs well in distance and forgiveness categories. It’s up there with the longest fairway woods in the game and hangs with other premium fairway woods. We can say the same for its forgiveness. You won’t find many other tour caliber fairway woods with more forgiveness than the TaylorMade Stealth.

You can also expect a high launch and high spin with the Stealth. Those characteristics make it easy to hit, especially if you struggle to get enough height with your fairway woods. The optimal launch also helps you to maximize your distance. It truly feels easy to hit, and the ball flight is pleasantly high.

Check the Price for the TaylorMade Stealth Fairway Wood on Amazon here.

3D Carbon Crown – the lightweight crown allowed TaylorMade to shift more weight lower and deeper in the clubhead. That means a higher MOI and more forgiveness.

Twist Face – this is the curvature design of the face that helps keep mishits straight.

Laser Alignment – stretches across the top of the face to help golfers align their shots.

The TaylorMade Stealth fairway wood has a classy matte-black finish. With a glossy black topline, it’s noticeably different from the SIM range that features a white one. The black-out look of the Stealth certainly makes it look true to its name.

A silver TaylorMade logo and an alignment strip are the only color you can see when looking down at the ball. The logo appears on the crown while the strip runs along the top of the clubface. You can use both to align your shots.

The Stealth fairway wood has a large profile. Its 190cc head gives players confidence when they address the ball. The head is noticeably bigger than the Stealth Plus+ model, which has a 175cc head.

The TaylorMade Stealth fairway wood is easy for average golfers to hit. Not only does the larger head instill confidence, but the technology helps them out. The extended sweet spot makes it harder to hit an off-center strike. And forgiveness means any mishits will perform well and go straighter.

The Stealth helps many players boost their launch and height. Increased launch and height can help you add distance. Also, we noticed good spin characteristics on off-center strikes with the Stealth. That can mean fewer yards, but the added spin gives you more control and straighter shots.

Average players and high handicappers generally want more spin in their fairway woods. They especially need the spin rates to stay high on mishits. And the Stealth gives them that.

The higher spin rates also help you stop the ball faster on the greens. Stopping power may not matter so much when hitting a 3-wood because average golfers won’t get the ball to stop quickly. But it comes into play more with higher fairway woods like a 5-wood, 7-wood, and 9-wood.

The Stealth fairway wood offers excellent forgiveness. TaylorMade positioned the weight lower and deeper in the clubhead to increase MOI. The result is noticeable forgiveness on off-center strikes.

Also, the large profile adds to the forgiveness on offer. The Stealth has an expanded hitting area compared to the Stealth Plus+. So, you have more chance of hitting the sweet spot.

Twist Face technology and the V Steel Sole also add to its forgiveness. The clubface has a curvature that straightens mishit shots. With the sole design, you get better turf interaction. So, you get punished less if you hit slightly before the ball.

The Stealth sounds and feels like other fairway woods TaylorMade has made in the past. On impact, the sound is a clean ‘crack’ with the ball feeling lively off the clubface. You can feel why this fairway wood delivers fast ball speeds.

On mishits, the Stealth sounds and feels better than the Stealth Plus+. It keeps its sound and still feels quite lively. The Stealth Plus+ has a high-pitched sound on mishits while giving players more feedback on the bad strike. Better players will appreciate that additional feedback, but it isn’t for everyone.

The TaylorMade Stealth fairway wood offers players excellent distance and forgiveness. It gives you fast ball speeds, with the ball feeling lively off the clubface on impact.

Also, it gives you exceptional forgiveness. A large profile with an extended sweet spot offers that added forgiveness. Its technology helps you hit straight shots and get better turf interaction for cleaner contact.

The Stealth model suits a wide range of players, from average golfers to high handicappers. Low handicappers will get the best out of the Stealth Plus+ model.

Check the Price for the TaylorMade Stealth Fairway Wood on Amazon here.