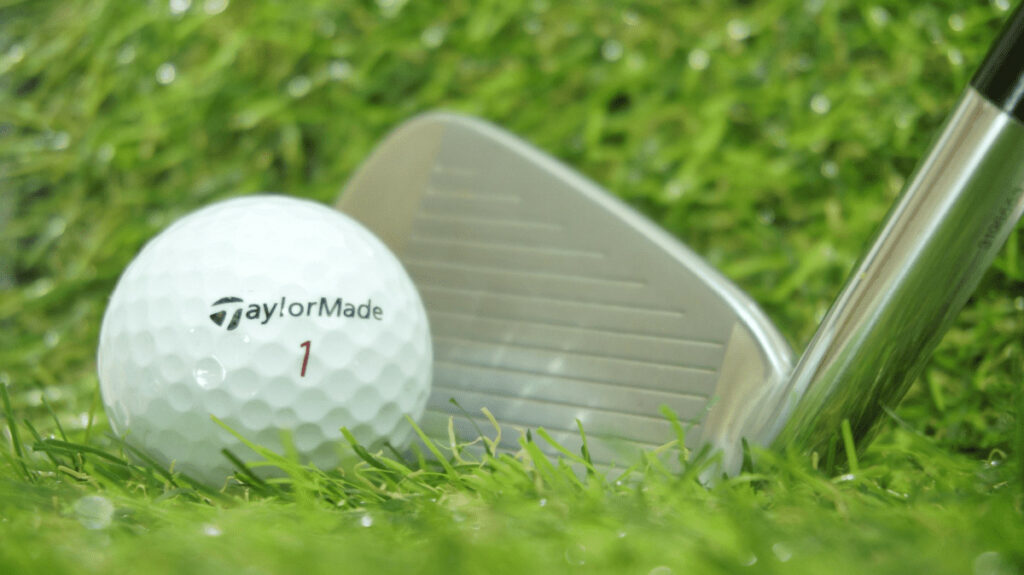 There was a lot of hype about the TaylorMade Stealth irons before they came to market. Specifically, many golfers were speculating that these irons would feature some carbon technology in them, like the woods do.

Let’s dive into our TaylorMade Stealth irons review below. The TaylorMade Stealth irons are a game improvement golf iron released in 2022 to replace the TaylorMade SIM 2 Max irons. You will see some of the same technology repeated, which is not a bad thing. However, there are some great benefits and improvements that are brand new to Stealth.

As far as target audience is concerned, the TaylorMade Stealth irons are really a mid handicappers club.

High handicappers can certainly use them, and I know some low handicappers would like the extra forgiveness they give. However, there are better TaylorMade iron options out there for more skilled players.

Let’s take a look at the individual features and performance of the TaylorMade Stealth irons. Without spoiling too much of the surprise, I can tell you I like this iron. TaylorMade did a good job, and the results are in the numbers. Golfers are hitting these clubs longer and straighter and having no trouble stopping them on the green.

The Cap Back Design features toe wrap construction to help improve overall forgiveness and feel. In addition, the top down look becomes a bit cleaner. This is not a bulky looking iron, something that Cobra and Callaway have been known to do in the past.

The Echo damping technology absorbs vibration when a golf makes contact with the ball. Essentially, there is some vibration unless you hit the center of a clubface. With the Echo Damping polymer, you will feel this vibration to a much lower degree.

The Stealth is, without a doubt, a bit more sleek looking than previous TaylorMade game improvement irons. I guess this is where it gets its name.

The Stealth can work for a wide range of players; there is no need to make two different sets. This could actually end up saving you some money if you are right on the cusp of being between a mid handicapper and a high handicapper.

The Stealth irons feature the patented TaylorMade Thru Slot Speed Pocket technology. Players looking for increased ball speed and extra forgiveness tend to love this technology. This is a game improvement club, so it does helps players hit the ball long and straight.

Overall from a workability standpoint, you won’t be overly impressed with the way the club can help you hit a draw or a fade. However, the technology is pretty impressive when it comes to a higher launch and a big jump off the face of the club.

Essentially it’s a distance iron with forgiveness and a high enough launch built into it.

The 450SS face has a large sweet spot. In fact, for an iron that is not all that bulky, we were impressed with the size of the sweet spot and the fact that it is a bit bigger than we expected.

When I hit the ball in the center, it went straight, as you would expect. When hitting a few shots closer to the toe I did lose a few yards, but it still went relatively straight.

In other words, the club is plenty forgiving, regardless of your handicap.

The center of gravity has been shifted from the original TaylorMade SIM 2 Max design, and this helped to improve the overall ball flight and make the club more forgiving.

Remember that when a golf club has a bit more forgiveness built in, you also tend to lose a bit of precision. Those that are still looking for precision and accuracy should consider something more like the TaylorMade P770 or P790 irons.

The feel in the TaylorMade Stealth irons is made better by the inclusion of the Echo Damping System. With Echo Damping, a soft polymer blend helps to reduce vibrations and create a more forged like feel.

Essentially you will get the benefits of a cavity back game improvement club but the feel of a forged golf iron. It’s hard to argue about this combination of performance that TaylorMade provides.

The TaylorMade Stealth irons are game improvement golf clubs, so we can expect that they be strong lofted. Strong lofts help golfers to get more distance. Increased distance is important because it’s easier to approach a green with an 8 iron than a 7; it’s just a fact in golf.

However, now that companies have learned to lower the center of gravity and make golf clubs more forgiving, some of these iron lofts have gotten a bit extreme. The good news is that you can expect modern standard lofts from TaylorMade on this one.

The 43 degree pitching wedge is about what we would expect to see in a set like this that is designed to work for a large majority of golfers.

Who Should Use These Irons?

Perhaps one of my favorite things about the TaylorMade Stealth irons is the fact that they can work for a wide range of mid to higher handicappers. In fact, there is something to be said even for some lower handicap players putting a few of these in the bag for the long irons.

Golfers that are seeking more forgiveness, increased distance, and generally an easy time hitting iron shots will like what the TaylorMade Stealth irons have to offer. When you stand over the Stealth irons, it’s confidence-inducing, and it plays into the results you get.

I really wasn’t a huge fan of the TaylorMade SIM 2 Max. I could see that they served a purpose of being long and forgiving, but the overall look and feel took away from the performance a bit. However, the Stealth irons seem to be a more complete package. I’m impressed by what they offer and feel like this club will hang around for a while; remember how TaylorMade did that with the M2? Maybe the Stealth is along the same lines.

Check the price for the TaylorMade Stealth irons on Amazon here.