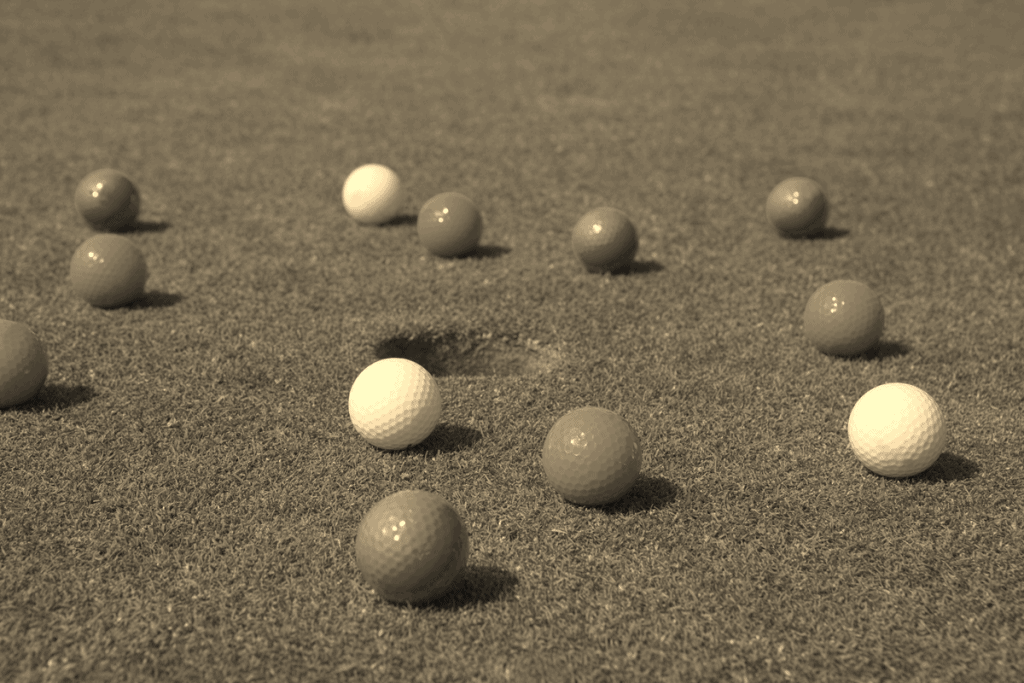 These balls are great for anyone who wants a bright color ball that can stand out in the rough. We’ve put the Volvik Vivid through its paces and will show you what we’ve discovered in our Volvik Vivid review below. Check it out below!

Volvik Vivid Review: At a Glance

Volvik Vivid golf balls are a ‘break from the norm’ in several ways. They are of 3-piece construction. As distance goes, these balls offer some great characteristics, especially off the tee.

Unlike other manufacturers, Volvik has made the central core lightweight and increased the outer core’s weight, giving this ball low spin and more distance and roll.

This ball is perfect for those who are seeking to get more distance. The bright exterior finish is also perfect for those who may occasionally stray from the fairway, as they are very easy to locate, even in deep rough. Beginners, younger players and women will be drawn to the bright colors. For players with sight impairments, Volvik Vivid golf balls could make a really great choice.

Once I’d got over my shock at how bright the Volvik vivid golf balls were, I decided the best way to test their performance was to tee a few up on the launch monitor. I used a driver, a 7-iron, and a wedge to test the performance across the bag. Hitting 10 shots with each club, I compiled some average data. Here are the results from the following areas in my Volvik Vivid review:

After hitting several drives, it can certainly be said that the Volvik vivid golf balls are low spin. I found that a general average was around 1800rpm. The side angle was around 2.5°, so pretty straight. This makes the Volvik vivid a good choice for those who could are looking to reduce unfavorable trajectories, or anyone who has a bad slicing problem.

The ball speed from the driver was quite high. When I managed to catch it off the middle, it averaged around 158mph. This is the faster end of what I would expect as an average.

The carry was equally impressive. The carry of these balls is huge. The best I managed to achieve was around 285 yards, which is a bit longer than I normally hit it. However, the ball did seem to produce some impressive roll, making 300 pretty achievable for total yardage. I like that.

Bearing in mind that Volvik has specifically designed these balls to be low spin, I was not expecting to see huge numbers. They are not a ‘soft’ ball, and the numbers prove it.

When hitting a mid-iron, I saw good speed off the face, 120mph. As with the driver, the carry was very respectable. I achieved 170 yards as an average without too much difficulty. The launch monitor recorded my average backspin at 5600rpm. This is below my usual average spin rate with a 7 iron. While this will keep the ball fairly straight, it might make it difficult for players looking to add more shape and stopping power to their shots.

With my sand wedge in hand, the low spin characteristics are really apparent. Every shot I hit fell well short of 10,000rpm. The average was around 9200. For beginners who aren’t too concerned with making the ball stop dead, this won’t be an issue. For the more advanced player, you’d have to really work to make the ball move once it lands on the green.

With a compression rating of 75, the Volvik Vivid golf balls should be classified as a ‘mid’ level when it comes to hardness. The ball’s core is softer, less dense, and the outer layer is much denser makes the ball play like something with much greater compression. It should increase ball speed and make your shots straighter with a lower spin.

How the ball feels will not be to everyone’s taste. As we said above, it certainly isn’t soft. On striking, you’ll get a solid-feeling ‘clack’. When around the green and on the putting surface, this effect is really noticeable. Some players like a crisp feeling contact, but it won’t be for everyone. For those who are more accustomed to using a softer ball, the change will be very noticeable.

The zirconium outer layer of the Volvik vivid golf balls is pretty durable. The matte finish seems pretty bulletproof and seems not to tarnish as quickly as softer balls. After deliberately thinning several wedge shots to assess the durability, there was no surface damage visible.

While the Vivid balls hold up well to a whole manner of abuses, in reality, one area that is worth considering is the finish. Due to the bright color and unconventional matte finish, we realized that dirt and deposits are very noticeable while playing. This obviously isn’t a deal-breaker, but it is more noticeable when compared against golf balls with a glossy finish.

Getting ‘under the hood’ of the Volvik Vivid golf ball, Volvik have a few key traits that make their balls perform the way they do.

The Vivid balls do things a little differently. Volvik opts for a solid inner core and a softer outer layer. The aim of this approach is to optimize distance by transferring the power from the inside to out. It increases centrifugal force, which should give you a little extra distance.

By placing the ‘weight’ of the ball away from the center, Volvik increases the moment of inertia. In exactly the same way as with your clubs, the moment of inertia encourages an object to stay true to its original path. When launching a ball on a set path, this can only be a good thing.

Volvik constructs the inner core of their ball from Bismuth. This compound is designed to ensure a greater energy transfer from the clubface to the ball. What this means is a slightly faster launch speed.

A Tough and Durable Cover

If you have ever used a softer ball, you’ll already know that they cut up really easily. Volvik has incorporated Zirconium into their golf balls’ outer shell. Aside from durability, this compound should allow a little give to offer some spin when playing shots that require more feel.

The Volvik Vivid golf ball features a patented radially concave dimple. While complex, what it essentially means is that the ball should see an increased flight time, greater lift, and gain greater distance.

Who Should Play the Volvik Vivid?

The Volvik vivid offers distance as its main focus. If you are looking for a straighter flight, extra carry, and something highly visible, then the Volvik Vivid golf ball would be ideal. It is most certainly suited to higher handicappers and beginners.

I would recommend the Volvik Vivid golf ball for any of the following players: –

If the bright colors aren’t for you or you want maybe a little more spin, then there are plenty of great quality balls that offer similar to the Volvik vivid golf balls.

These balls also offer greater distance. The technology behind the name ‘smart core’ is based on the fact that these balls behave differently depending on how fast they are hit. For longer shots, they offer less spin. However, for shots requiring a little shape or stopping power, you’ll still get plenty of rpm if you need it.

Here are the key features: –

Bridgestones effort is another that is ideally suited to players with a slightly slower swing speed. They feel a lot softer than the Volvik vivid, but that might be what you are looking for. They are seriously springy. They still aren’t quite soft enough to inhibit the ball rolling, but they will give great distance due to a slightly softer compression.

Here are the benefits: –

Perhaps you like the idea of a ‘fast’ ball, but the vivid color and finish aren’t to your liking? The TaylorMade TP5x offers explosive distance and range. It is of a 5 layer construction, 4 of which are specifically designed to produce greater ball speeds. The outer shell is constructed of high flex material, giving both durability and yet more ball speed.

What to Look for in a Golf Ball

There is plenty of variety out there. To choose the best golf ball, you need to think about what you want to achieve. Here is a little guidance.

While your swing is important, the ball also does a lot of the work. Balls that offer reduced or slower spin work better with long clubs and drivers. Backspin is great when you want the ball to stop, but you should try and find a ball that minimizes this when you are looking for a lot of roll. The Volvik Vivid is pretty great when it comes to hitting it a long way. After all, it has featured numerous times in professional long-distance driving competitions for this very reason.

Often golfers see spin as a good thing. This can be the case, provided that the ball is turning in the direction you want. If you impart a lot of sidespin on the ball, this will only make an unfavorable flight worse.

For the high handicapper, a reduction in spin should be the aim.

The tendency to hit shots thin, especially with wedges, is the plight of all medium to high handicappers. When this is combined with the fact that we don’t always use the cheapest golf balls, you can see that cutting and cracking golf balls can become costly.

By picking a ball with a durable outer, you can ensure that you get plenty of use out of them, even with the occasional mis-hit.

Our Volvik Vivid review certainly brought up a few surprises. As a distance ball, these are actually pretty great. The bright colors might not be to everyone’s taste, but there are plenty of ‘traditional’ balls out there already.

The Volvik Vivid golf balls are ideal for high handicappers who want all the help they can get to hit the ball straight and need to locate and find the ball if they don’t. The Volvik Vivid gives great carry, increased roll, and a pleasant playing experience, with a dash of eye-catching color thrown in for good measure.