What is a scramble in Golf? (Complete Breakdown) 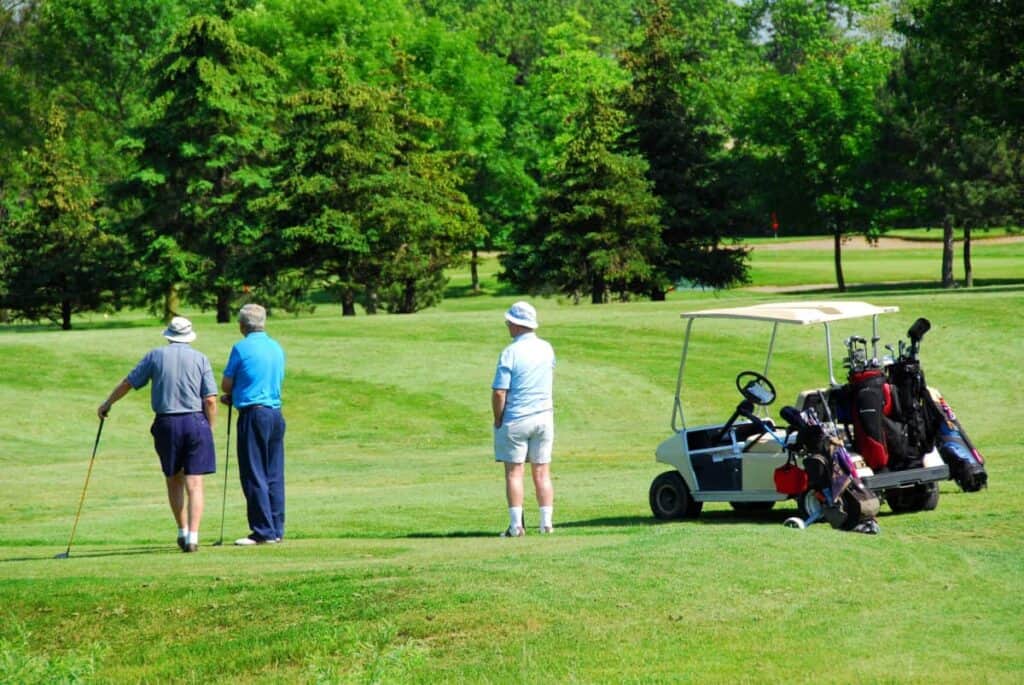 Whether you’ve been playing for decades or just picked up a set of clubs, chances are you’ve heard of something called a “golf scramble”. But what is a scramble in golf, and how you do you play?

We wanted to make an easy guide for all things golf scramble, so here’s everything we can tell you about the popular golf scramble format. Check out our full breakdown below to be equipped with the knowledge you need next time out!

What is a Scramble In Golf?

A golf scramble is one of the most common formats you’ll find when it comes to tournament golf at country clubs and charity events.

This format is typically meant to be stress free, relaxed, and fun for golfers of all skill levels. The relaxed rules make the golf scramble the preferred play style at most charity events.

How to Play a Scramble in Golf

Part of the beauty of a golf scramble is how simple it is to play! I’ll try to make it as easy as possible to learn how to play a scramble in golf.

This is a team game, where each member of a foursome will hit their own ball through the round. On each hole and each shot, the group picks the best ball hit by the group, and selects that ball as the location that everyone will hit from. Essentially, you are collectively trying to achieve the lowest score possible on every hole you play.

Each player hits a ball on every shot, but only the best shots by the group are taken on each hole. You do this on every hole, until your 18 hole round is complete. Obviously this is meant to make playing a golf hole much easier, and that’s why you tend to hear about very low scores by some teams in a golf scramble.

It’s not uncommon to hear about -10 or even -15 winning a scramble tournament!

So what are the golf scramble rules?

There are a few common rules you should know for when you play your next scramble:

On top of these more common golf scramble rules, there are some rules that can vary from event to event. For instance, in some charity or country club events you’re allowed to buy perks! Groups can buy mulligans, the opportunity to hit from the red tees, or even an extra toss from where the ball came to rest!

These perks all give teams even more opportunity to put their lowest score possible on the leaderboard.

What about Scramble VS Best Ball?

It’s easy to confuse best ball vs scramble. In principle they sound like the same thing, but they’re actually quite different.

A best ball event can be done with 2,3 or even 4 player groups.

Obviously scramble vs best ball is a way different scenario. Before you sign up for your next tournament, make sure you know the difference between these two common events!

There are a number of alternatives to the standard scramble format that can give an event an added twist.

The most common variation is called the Texas Scramble. The main difference here is that each player must hit at least 4 drives. The additional layer of complexity adds a layer of strategy to a golf scramble.

A Las Vegas scramble will commonly feature foursomes, this time using a 6 sided die. Each player hits their tee shot, and then a roll of the dice will decide which ball is to be used for the next shot.

The is one of the only golf scramble games where handicap comes into play. Your team is allowed to utilize each players handicap, and use the net score for each hole rather than gross score. This can make the game pretty tough on the low handicap crowd!

The one is straightforward, but prevents one player from completely carrying a team. In the Florida Scramble format, the player whose shot is chosen as the best ball cannot hit for the following stroke. One team member will always be skipping a stroke opportunity in this format.

A golf scramble to meant to be a tournament game that is fun for everyone playing. This format gives players the opportunity to put up a collective score that probably wouldn’t be possible for each individual out there.

A golf scramble can be enjoyed by anyone, from a casual player to a scratch golfer who plays every day! Hopefully this helped answer the question of what is a golf scramble, what golf scramble rules are, and some info on some fun games!

PrevPreviousLost Golf Ball: Here’s what to do (2022 Rules)
Next How to Repair Divots and Ball Marks (The right way)Next