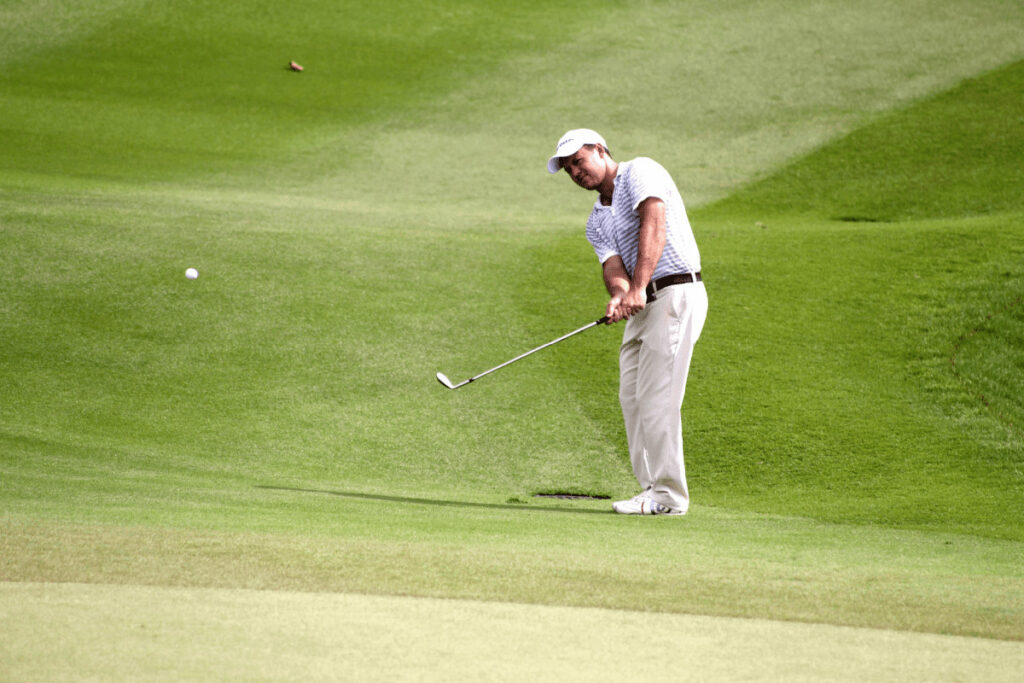 When new golf clubs come to the market, players always talk about trying something from Titleist, Callaway, or TaylorMade. Srixon kind of flies under the radar. However, I really like the way the Srixon irons tend to look and feel.

With Srixon feeling a bit more like they are all about golf as opposed to being about marketing, I was anxious to try out the Srixon ZX7 irons. With some improved aesthetics over the last few years, the ZX7 didn’t disappoint.

My one tip of advice here, make sure you are a decent ball striker if you want to play an iron like this.

Check out our full Srixon ZX7 irons review below! The Srixon ZX7 irons are considered a players iron. However, I think of it more like a player’s iron with a tiny bit of forgiveness built in. The ZX7 isn’t quite a pure blade like you would expect from Mizuno, Miura, or Titleist.

Instead, this is more of a players club with the benefits of a bit of forgiveness and control. Golfers that use the ZX7 irons should probably have relatively low handicaps, plenty of swing speed, and the ability to strike the ball near the center of the clubface most of the time.

The Srixon ZX7 irons have some impressive performance that helps them stand out for the better players in the game. Remember, the better you get at golf, the more critical you become of certain golf clubs like this ZX7.

Most better players like to see a clean and narrow-looking clubhead. The shorter, more compact design makes the golf club more impressive and workable. In addition, a smaller clubhead makes the club easier to control.

A forged design is what gives players’ irons a better feel and feedback. When you hit the ZX7 square in the center of the clubface, you are rewarded for it. When the face is missed slightly, expect to get the feedback you need to hit a better shot the next time.

There is a bit of a progressive sole on these ZX7 irons, but it’s nothing too drastic. Overall expect narrow workability and impressive turf interaction when swinging with the ZX7.

The first thing that has always stood out to me about the Srixon irons is the way they look. The ZX7 are very clean looking. When compared to other golf irons on the market, you look like you know what you are doing when you get these clubs in your hand.

For some golfers, myself included, if a golf club does not have a right look to it, the performance will not be the same. In other words, I have to feel confident with the way the club looks to be able to pull off the shots I want to hit.

The Srixon ZX7 irons are a players style blade. Mostly, the club is highly workable, provides average distance, and has a great feel. The overall golf shots you hit will certainly not be the longest you have ever hit in your life.

However, we noticed, especially in the short irons, that getting the ball close to the hole was easy. You can attack a pin from anywhere on the course, and the clubs are really responsive.

For golfers that like to hit a draw or a fade, the Srixon ZX7 responds quite well.

Forgiveness is not the strong point of the ZX7. If you like the way this club looks, feels, or performs but you know you need more forgiveness, then the ZX5 or ZX4 could be a better choice.

The ZX7 from Srixon is made to be a single-piece forged blade. This means there are no added tungsten pieces or speed pockets to help you get that extra stability and consistency at impact. With this club, you are kind of on your own.

However, the reward for that has always been improved sound and feel.

The sound and feel of the ZX7 are the best you will find in the Srixon lineup. The clubs feel pure, and the forging process they go through has helped them be a bit more responsive than I could have expected.

The blade like address position is certainly designed for a better player, and you can see that when you setup, and then you feel it when you make contact. Expect large dispersion rates if you are not good at hitting the center of the clubface.

When I took these irons out for 9 holes, my playing partners were constantly saying “that sounded great off the face”, which always feels good to hear.

The specifications of the ZX7 iron are very much in the player’s category. This is why when I recommended these golf clubs for the more advanced players, I wasn’t kidding. The pitching wedge loft is 46 degrees which is much closer to the way golf irons used to be made.

Some game improvement irons on the market have pitching wedges with closer to 41 degrees of loft. Clearly, they are going to give you much more distance than the ZX7.

If you are going for a club like this, you have to have a mature viewpoint on distance and be comfortable that you are not going to necessarily hit your 9 iron as far as your friend with the new Callaway Rogue irons, yet you may hit it quite a bit closer to the hole.

Who Should Use These Irons?

At this point, you should have a very good idea of what the Srixon ZX7 irons offer. This is a classic player’s design with tremendous workability and a great feel; it’s not a game improvement iron.

Golfers that will benefit from the Srixon ZX7 include:

If you are serious about the way the golf ball feels coming off the clubface, the Srixon ZX7 is a club that you should be considering using. This is a tour-level golf club with a higher price tag, yet that’s what it takes to get proper performance in this category.

When we think of players’ blade irons, Titleist and Mizuno often come to mind. After trying the Srixon ZX7, they have earned a spot on this list. I’m impressed with how pure the feel is. In addition, I felt like the workability was better than other options on the market.

If you are concerned about forgiveness and your ability to hit the center of the face consistently, move right along from this golf club, it’s not for you!

However, if you know your game is getting more consistent and you are ready to see what the pros are talking about regarding reliability, consistency, and control, the Srixon ZX7 is one to try.

Check the price for the Srixon ZX7 irons on Golf Galaxy here.