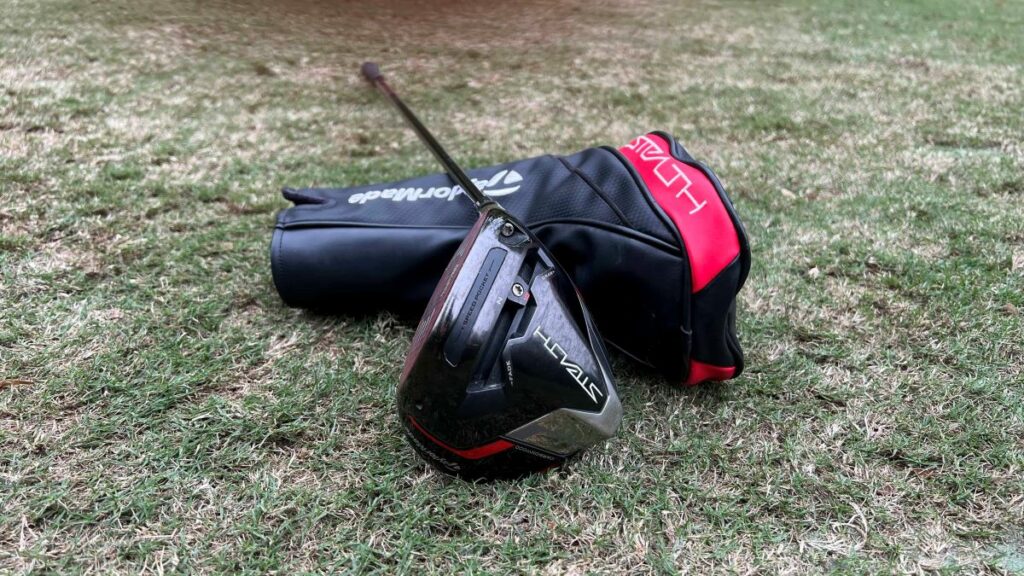 The TaylorMade Stealth driver was the club I was most excited to try in 2022, and for good reason. Golf manufacturers continually push out new clubs year after year. However, there is sometimes very little change from one release to the next.

With the TaylorMade Stealth driver, that was not the case. The driver’s head was made with a 60X Carbon Twist Face. Based on the reception of this driver, it looks like Carbon is here to stay.

TaylorMade has been working on this technology for more than 20 years. It may have taken some time for it to come to market, but it was worth the wait. Let’s take a look at all the TaylorMade Stealth has to offer and whether or not it is a good fit for your golf game.

Check out our full TaylorMade Stealth Driver review below. Check Price on Amazon
Check Price at Golf Galaxy
We earn a commission if you make a purchase, at no additional cost to you.

TaylorMade put 20 years of research and dedication into producing this golf driver. It has impressive distance capabilities, built-in forgiveness, and a sound and feel that is considerably different than a Titanium golf driver.

The TaylorMade Stealth driver is built towards the mid-handicap golfer. However, there is plenty of technology here to work for both the low and high handicappers. With adjustability and an overall high MOI, it’s a club that works for anybody.

I like a lot of what the TaylorMade Stealth has to offer; I noticed increases in distance and lower dispersion rates. The price tag is tough on this one, but the carbon technology will not be a flash in the pan. In other words, this is an investment into my game for the next 5-7 years.

The TaylorMade Stealth driver is known for the Carbon Twist Face, but obviously, TaylorMade did not stop there when it came to key features and technology.

The face of the TaylorMade Stealth Driver has 60 layers of carbon. The sheets of carbon were placed strategically to improve energy transfer from the clubhead to the golf ball. For golfers that need higher ball speeds, regardless of where contact is made on the face, the Carbon Twist Face is the answer.

When TaylorMade tested this technology, they compared the SIM Max driver vs. the TaylorMade Stealth and noticed large gains in ball speed.

How the clubhead travels through the air has a big impact on the total distance you are able to hit a shot. The TaylorMade Stealth Driver features a unique shape; I prefer it to the previous TaylorMade SIM line.

Speed Pocket technology will likely be something that TaylorMade keeps in their clubheads for years to come. With Speed Pocket Technology, you will get better ball speed, increased forgiveness, and help for those shots that you miss a little low on the club face.

You can’t name a driver the Stealth and then have it be ugly! All kidding aside, this is actually one of the better-looking golf drivers that TaylorMade has brought to market in the last few years.

I like the black and red design; the club just looks fast and dangerous.

In addition, some clubs in recent years have looked a little open at address and made it hard to get the look right, but the TaylorMade Stealth sits really square which definitely helped me feel confident in my setup.

One of the most important features we are seeing in golf drivers this year is the movement of weight within the club head. In addition to having the proper materials in the club head, the positioning of the weights allows for more fine-tuned performance for golfers.

TaylorMade used the Asymmetric Inertia Generator to move weight more toward the rear of the club. This improves MOI, increases launch angle, and makes the club much more forgiving.

I originally wanted to try the TaylorMade Stealth to get more distance from my drives. Let’s face it; golf drivers need to travel a long way to be worth more than $500.

Overall the distance was great, I picked up some speed and roll, but I think the consistency helps the TaylorMade Stealth stand out from other drivers. Long and straight consistently is what any golfer is looking for.

TaylorMade does an excellent job with forgiveness. To make the MOI higher in Stealth, more weight was positioned low and deep in the head. With the TaylorMade Stealth standard driver, there is no Sliding Weight Track, and it increases forgiveness a bit.

The TaylorMade Stealth + is more of the player’s golf driver, with a little less MOI and a little more workability. If you want forgiveness to, make sure you have the loft fine tuned to your needs as well; slightly higher tends to be better.

There is also the TaylorMade Stealth HD which is the high draw version for the higher handicap players.

The Stealth comes in a 9, 10.5, and 12 degree loft. The most forgiving model from a loft perspective will be the 12 degree.

One of the big concerns with switching from Titanium to Carbon was how the club would feel and sound. We have been used to the Titanium for so many years it’s nerve-wracking to switch to an entirely different material.

TaylorMade was prepared for this and used shaping and internal ribs to fine tune the sound and feel.

Most golfers that tested the TaylorMade Stealth could notice a difference from their Titanium drivers, but it was a positive difference. The sound is not overly loud; it’s a little higher pitched, but it still gives you that boost of confidence you need when you hit the shot in the center of the clubface.

Some lower handicap players said they noticed the clubhead felt a little softer. I didn’t notice it being overly soft or causing me any problems. In fact, I found it to be similar to the Titanium golf drivers in years past.

If your concern with switching to the Stealth is sound and feel, I think you will be pleasantly surprised by what you find in this new release.

As you can tell from my review of the TaylorMade Stealth driver, I was impressed with the technology. I think it’s an excellent solution for the group of players in the 10-20 range. For those that need extra ball speed, the TaylorMade Stealth can produce. However, there are, of course, other options on the market that was also really good this year. The Titleist TSR drivers come in three different models, the TSR2, TSR3, and TSR4. The Titleist TSR2 is the driver that is most like the TaylorMade Stealth. One of the things you will notice right off the bat with the Titleist is the low dispersion rates.

Golfers have continually chosen Titleist drivers because they are easy to control, can stay on the path are even a bit workable at times.

The TSR3 from Titleist is starting to get quite popular on the PGA Tour and is a good alternative for better players. The Callaway Rogue ST Max is a long and forgiving golf driver with some impressive improvements from the original Rogue series. With the Rogue, ST Max expects a big jump off the clubface at impact, a great overall feel, and that impressive artificial intelligence technology that Callaway has perfected.

If the look and feel of the last Rogue driver had you second guessing your purchase, rest assured that Callaway has corrected all negatives, and ST Max has been a top seller this year.

I would consider this one if forgiveness is something that has you concerned.

There are three Stealth models to choose from. Here are the differences between these three models. In my opinion, unless you have a specific reason, like a severe slice or you are a highly accurate player, the standard Stealth is the best overall choice.

Stealth: The Stealth is built for the mid handicapper looking for forgiveness, premium distance, and a mid-to-high launch. There is also a ladies’ version of the TaylorMade Stealth.

Stealth +: The Stealth+ is the lower handicapper version. For golfers that want a bit more control off the tee, this is a great option to consider. The spin from the Stealth + is really low, and the launch is also lower.

Stealth HD: The Stealth HD driver is a draw bias design for higher handicappers and beginners. The launch on this one is much higher and has more of a mid-level spin. If the driver is a club you struggle with, consider this one.

Check the Price for the TaylorMade Stealth Driver on Amazon here.

The bottom line here is that the TaylorMade Stealth driver is well worth the price. There is no question that this is a premium-priced golf driver, but with 20 years in the making, TaylorMade has done its fair share of work in developing this product.